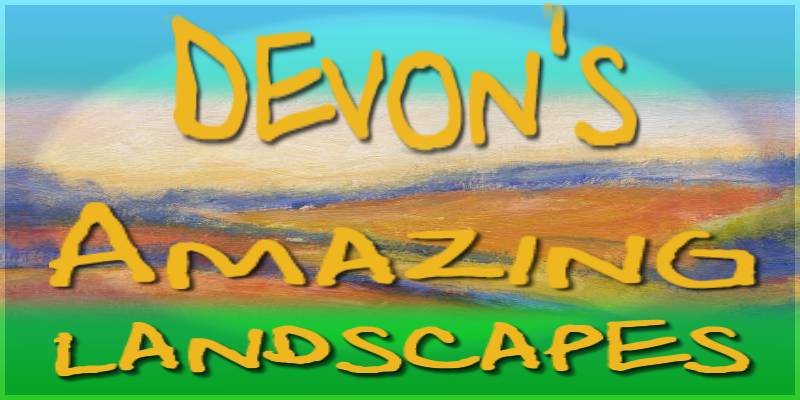 You don’t have to go far to find an inspiring view when you live in Devon. The hills and valleys, the moors and coast offer an infinite variety.

From craggy cliffs to gentle meadows, and everything in-between, one is spoilt for choice.

Painting in the Devon Landscape.

When I walk I don’t have the energy to carry all that stuff, I carry a sketchbook and a tiny set of watercolour – that is all.

My paintings are seldom completed on the spot. I do it when I’m right near home but I am rarely alone when I go further afield on foot. My husband, John, lugs me up hills and along craggy valleys and if the terrain is too difficult, he gives me a piggy-back!  John carries the picnic, sometimes going ahead to find a spot while I take the opportunity to look about and sketch, but when I’m walking I always have his arm to carry me along.

Thanks to him, I have been to some amazing places.

Now, I do have my van. That allows me to carry anything I want including a chair and off I go in that. Once parked, I can sit right next to the van with everything to hand. Bliss.

Influence of the Weather

Weather! How it varies and how it changes the scene – don’t you love it? I do; the seasons make the landscape change the colours and even the shapes, but even within those seasons the weather can change dramatically. Showery weather – we have a lot of that – changes the sky fom one minute to the next, and when the sun is low in the sky – look out for rainbows.

The time of day makes a difference too. Early morning with rolling mists give way to almost tropical sunshine at times. The evening changes the mood again. Deep shadows and bright highlights touched with gold just before sunset.

There are a thousand views from each spot and I could never hope to capture them all.

Variety in the Devon Landscape.

The Lanes and Hedges

It’s true that the deep lanes with towering hedges often hide the landscape beyond, but surprises are around the corner. A glimpse of green, red and yellow fields and valleys through a gate or a steep hill between the hedges when you reach a crest on a winding tiny lane brings a smile of appreciation.

Not every lane is dominated by high hedges. the higher areas often have much lower hedges and as you ascend to the heights of the Moors, Exmoor and Dartmoor, the hedges disappear.

You can see one of my paintings inspired by hedges here.

These two big moors have very different characters. Dartmoor is rugged with granite stone and land cropped by sheep. It can be bleak but is always dramatic.

Exmoor has steep wooded valleys and hills covered in heather giving way to rolling fields and the high cliffs of the North Devon coast.

There are long sandy beaches and pebble beaches and even an area of dunes . There are craggy cliffs, some of which are among the highest in Europe, and vally walks leading down to the sea.

Farming is the key to the fantastic patchwork patterns of red, green and gold. If you ever fly in to Devon in good weather you will see how extensive this quilt is. Much of the land is a rich red with areas of creamy yellow ochre and dark brown umber. The shoots of the crops in spring make lovely patterns too, and give that strange effect like ‘flip flop’ car paint and ‘tonic’ shirts of the early 70’s where the different colours in the material make the colour change depending on the angle.

Many a main road runs along a river valley. Twisting and turning and usually shaded by trees, the river appearing from time to time as you go. Sometimes swollen by rain and fed from the moors, they can flood the surrounding fields and I live on a stretch that floods both the roads and the railway. My little area can be cut off in severe weather.

Devon abounds with unspoilt villages and small towns. Picturesque thatched houses and stone barns can be found as well as churches and large houses.

Devon is in the South-West of England, and boasts both a North and a South Coast. Exeter is the principle City.

Paintings of, or inspired by Devon can be found in Devon Landscape. 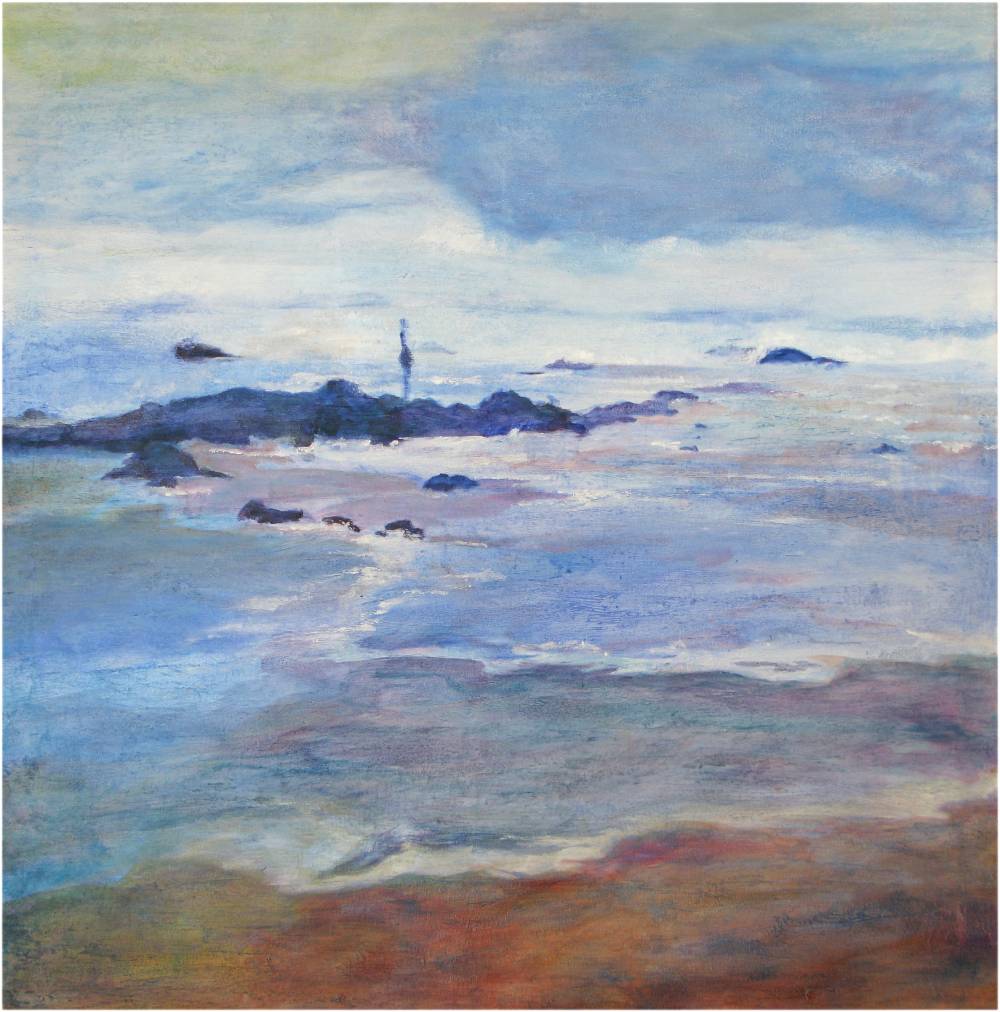 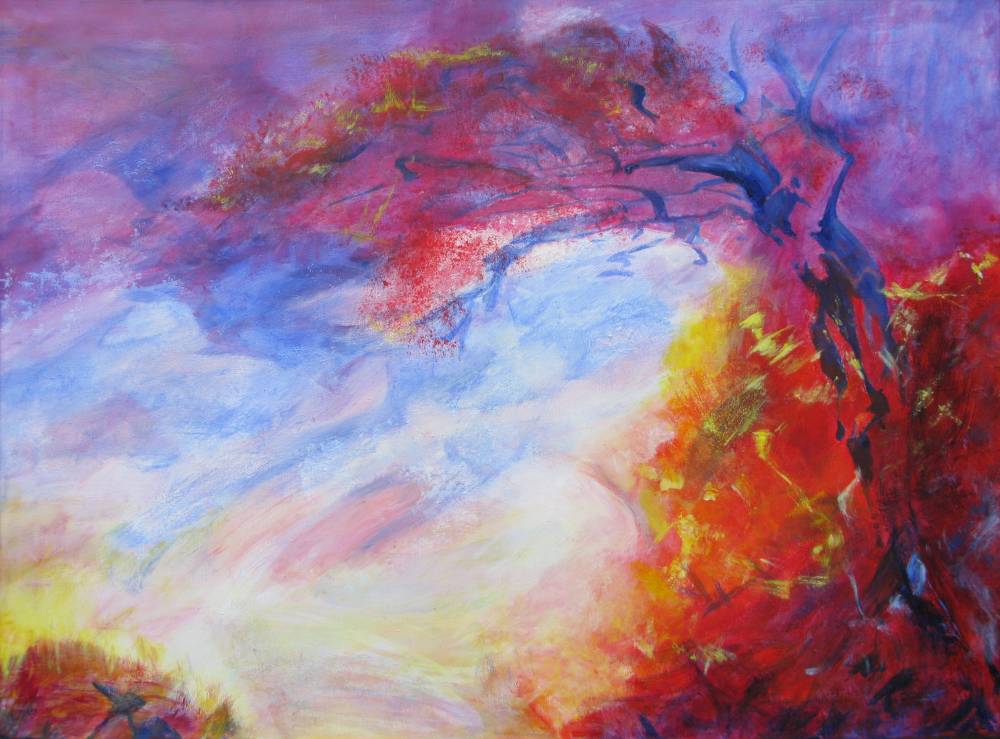 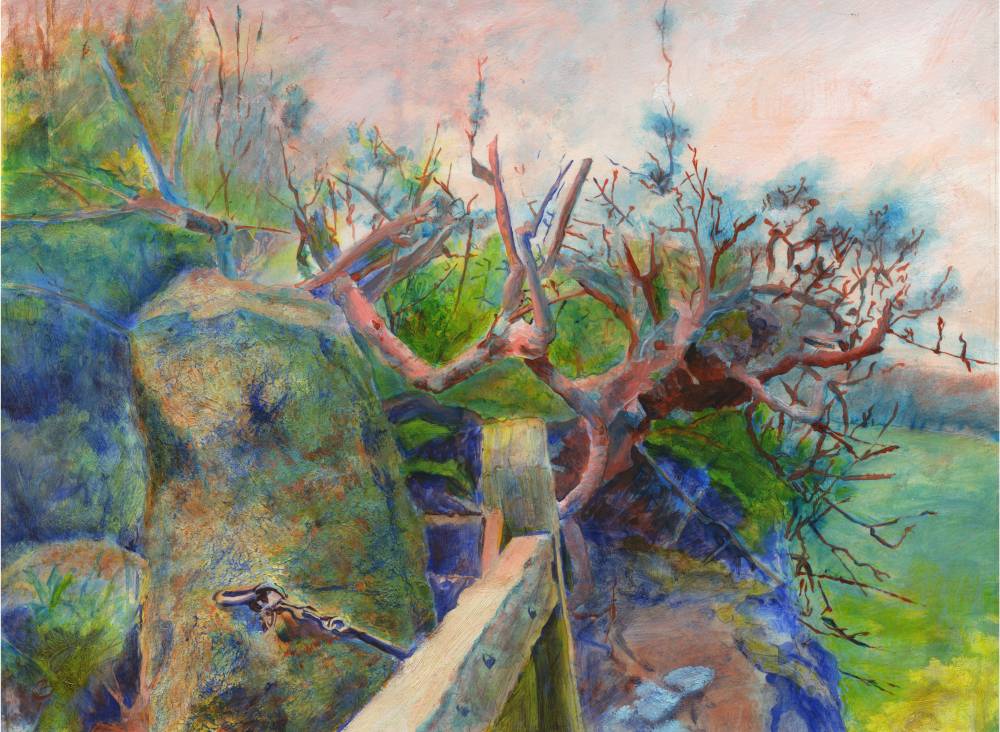 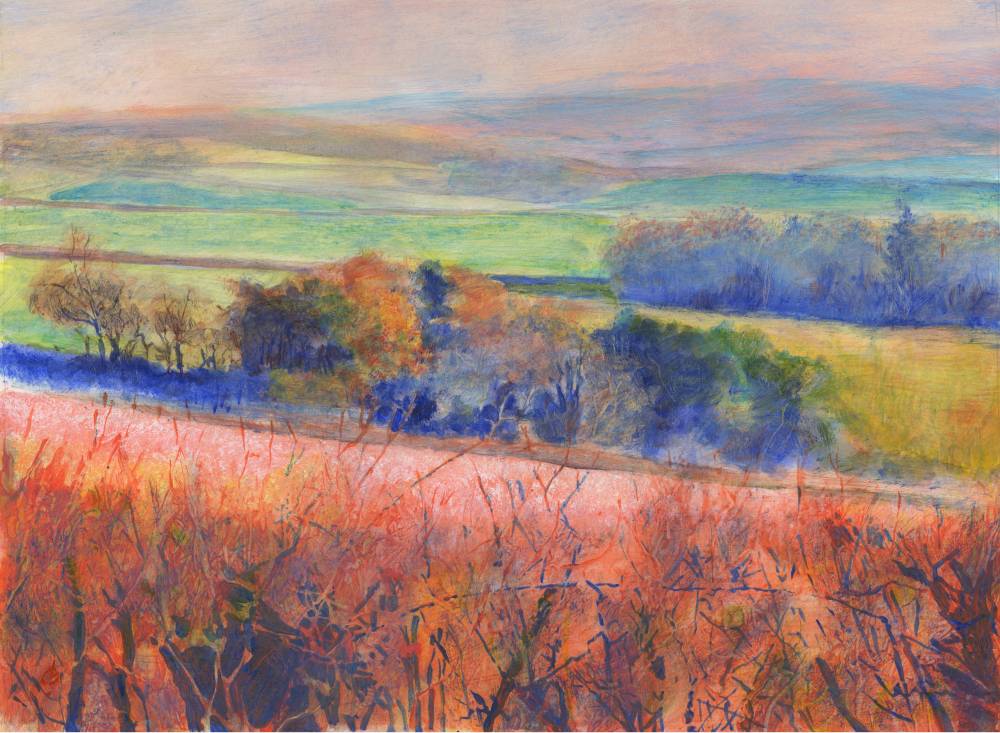 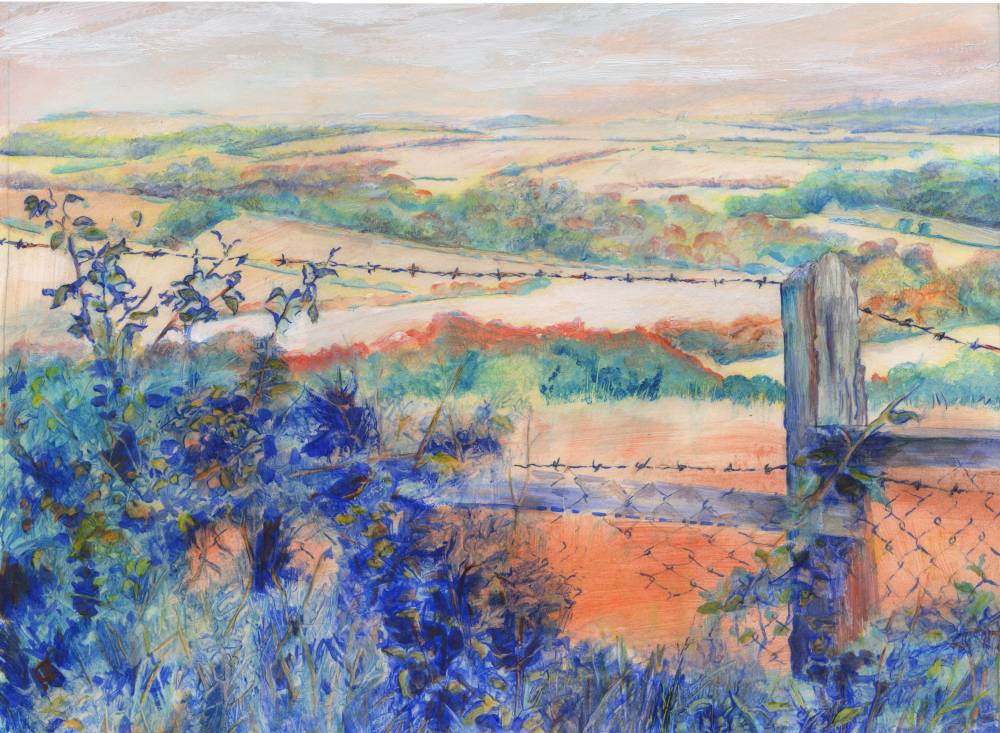 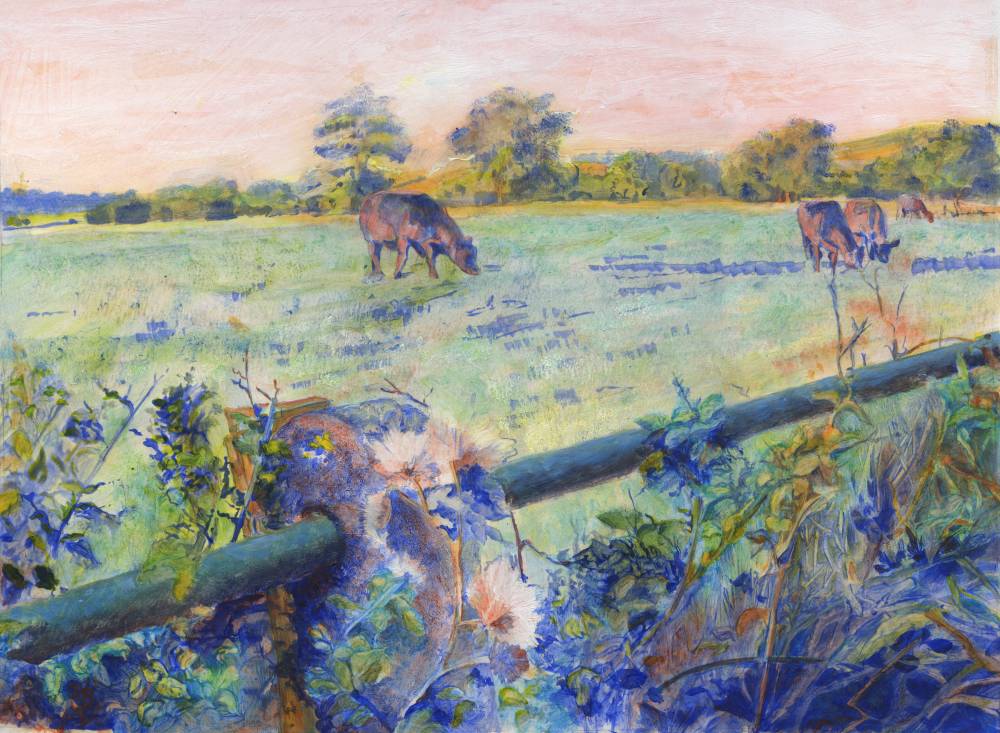 1 thought on “Landscape Painting in Devon”