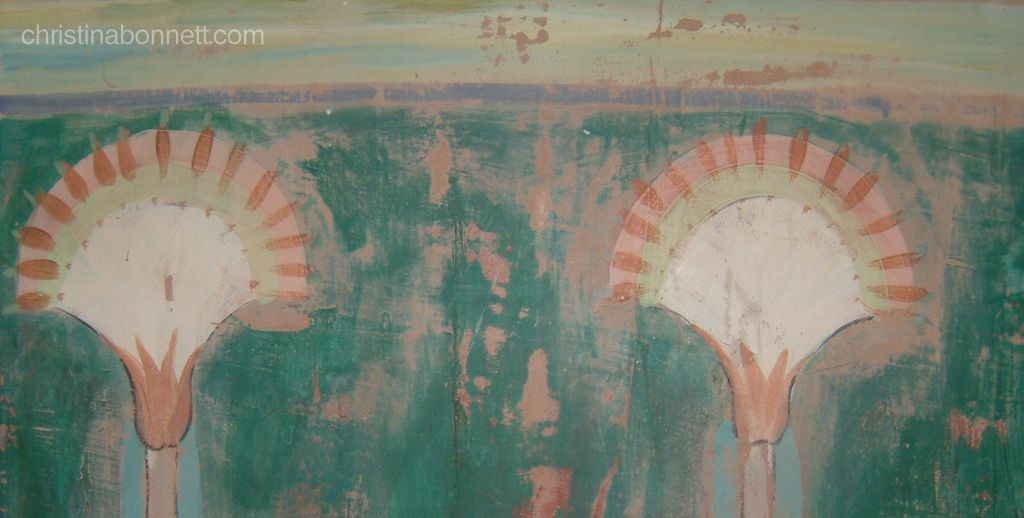 Let’s take a look at murals and friezes today.

I have done my share of painting on walls but done nothing as impressive as these two Friezes in the hall of a house in Culmstock Road, Clapham. 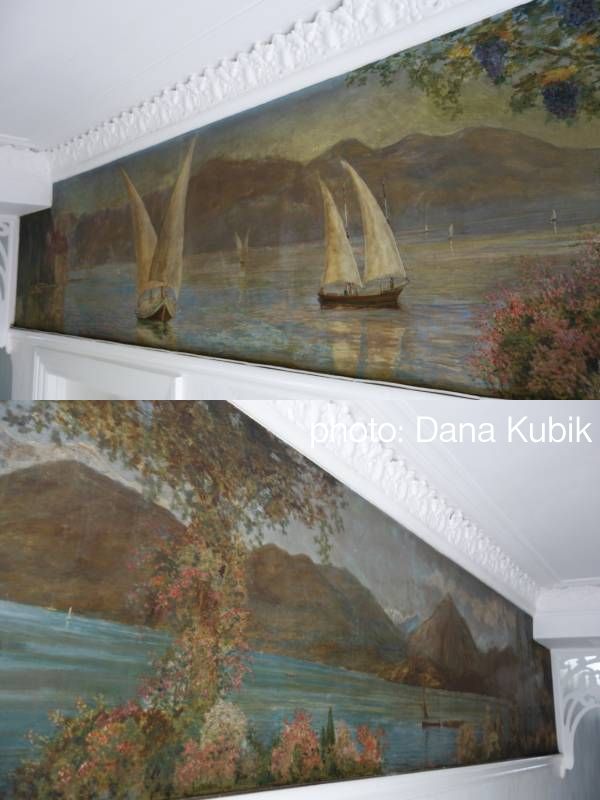 They have quite a history, and you can read about them in this article by Derrick Johnson who wrote about them after they were restored by Oliver Kay and photographed by Dana Kubick.
Derrick wrote several articles about people and places in Clapham, the more curious the better, for example the Eccentric scientist who weighed the earth and even some fictional characters associated with Clapham including Moriarty and Dr Fu-Manchu. You can read more of Derrick’s Articles by going to the Clapham Society’s Local History page.

Sadly Derrick Johnson died recently and will be sorely missed by the Society of which he was a member for so many years, tirelessly contributing to the historical research and queries from the public and other members. More about Derrick below.

Some of My Mural Paintings

As a student with little knowledge or skill I painted a mural on a wall in my bedsit. The landlord was a little miffed, but was kind about it. A later effort commissioned for a Clapham flat was met with more enthusiasm but was not an outright success because it wasn’t ‘full enough’ – it should have been a complete jungle immersion! A flood took it off the wall a short time later, more or less in one piece, and it found a home in a friend’s flat where it stayed for many years and got me other jobs. 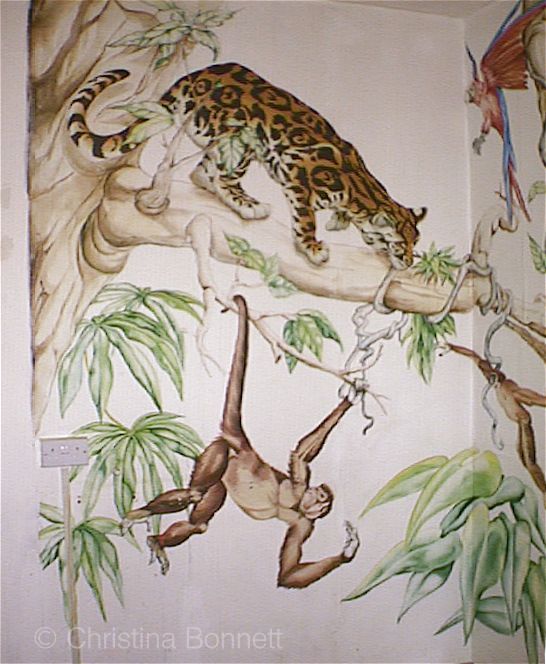 Later efforts were received with satisfying exclamations of delight – even when I painted poppies in red for a Californian client who expected them to be yellow!
(No pictures, unfortunately)

The caravan hidden in the woods was the most successful in my opinion but was seen by few, ‘hiding’ being the main obective. This angle shows it against the sky but from the road, it was invisble!

Murals and Friezes in Public Places

I have not had many commissions for murals although some have been quite public. A restaurant in Balham asked for a cartoon all around the room, telling a story. It had to be completed in a short time before it opened under new management.

There were murals on the end walls of buildings around London, I used to pass them as I drove back and forth to my studio and on delivery excursions.  Brixton has a number of murals. Walking around the backstreets of Portimao in Portugal on a visit there I saw this mural on neglected buildings that fitted in with the traditional style and cheered things up until it could be re-developed.

Murals in the home

Everywhere I have lived I have painted Something on walls or doors, some quite discreet such as a little face in the plaster, done in the the traditional ‘wet plaster’ fresco method using natural pigments. 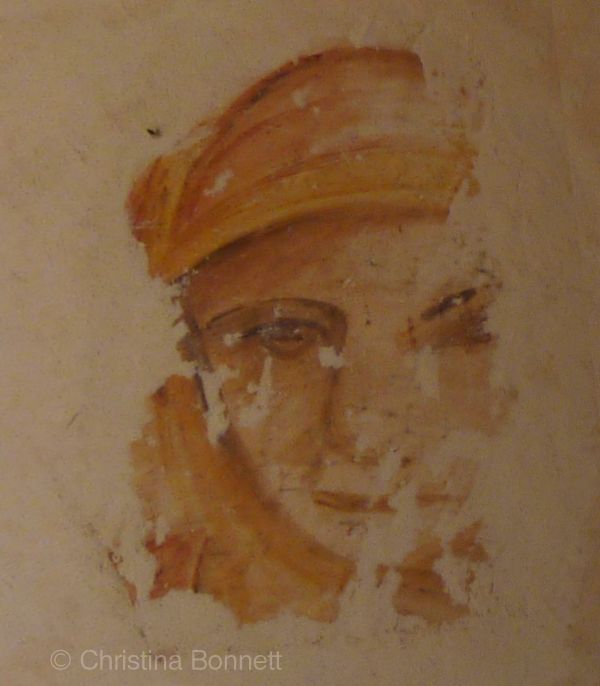 Others were elaborate such as a big door covered in medievel motifs. It was inspired by the painted interior of the cathedral in Mirepoix, Southern France. Every part of it is painted and this picture shows the arches. 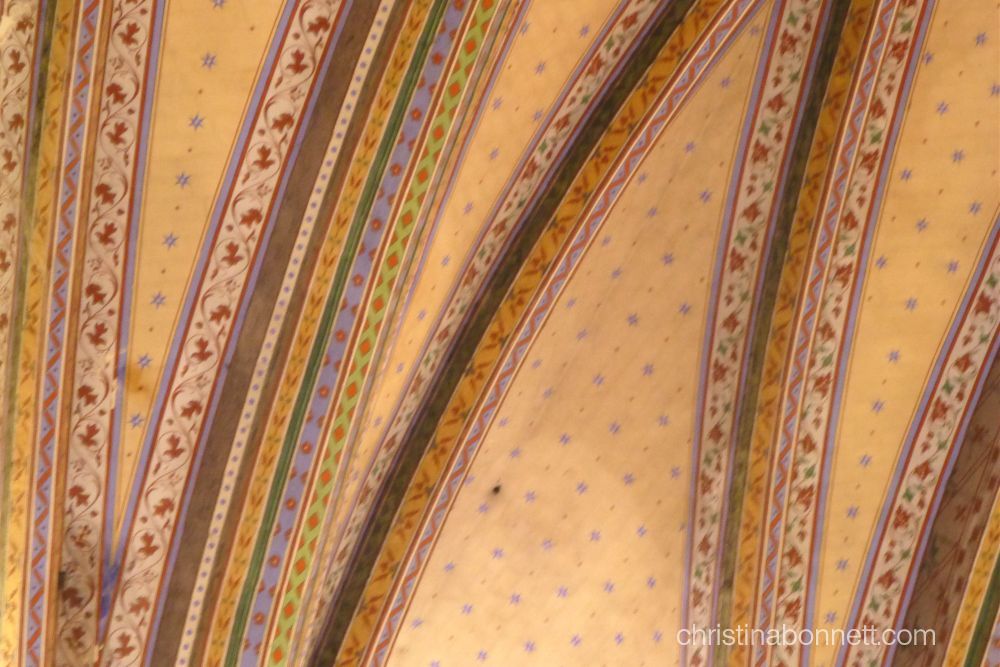 Decorative Patterns in the ceiling of Mirepoix Cathedral

This ‘Egyptian’ bathroom was inspired by the crumbling look of stripped ceiling and walls when I first moved in to my house in London. 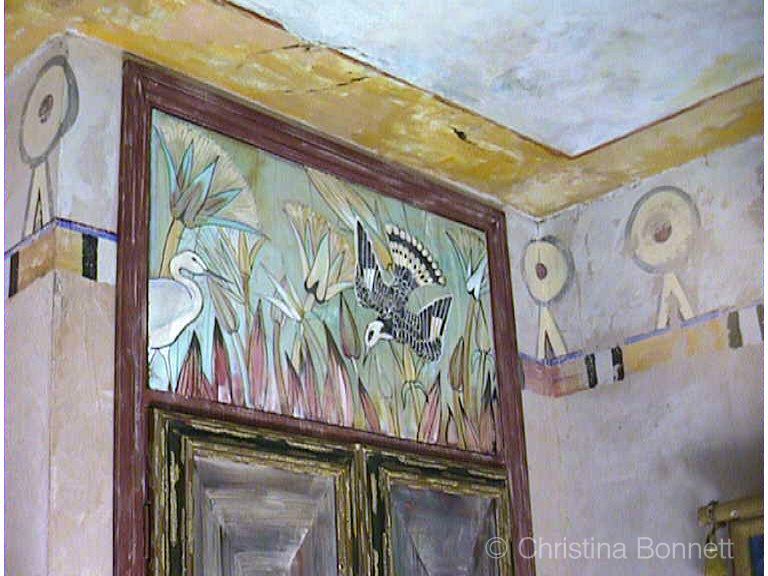 Egyptian motifs inspire the painted walls and panels in this bathroom

I have been comissioned to add a touch of fun to children’s rooms now and then as well as kitchens bathrooms and halls. The scale diminished as the years increased.

Nowadays I stick to painting on canvas or at least painting more manageable pieces of furniture. I think my days of clambering around on platforms to reach large areas of wall are over. They were never numerous and were always almost impossible for me anyway. Unfortunately, I was not tuned in to the importance photographing my work at the time so there are few records of my murals.

No doubt many of you drew on the walls as a child, as I did, much to the dismay of parents. Did you go on to paint on walls in earnest?

Some of you will know of my connections with The Clapham Society, but you may not know that it was initiated and is maintained to this day through my long-standing friend Alyson Wilson. Her love of art was shared by her husband Michael and that first brought them to my door in my role as a picture framer in Clapham many years ago.

Alyson’s keen eye and extensive knowledge of historical buildings as well as her love of art has been a positive influence on my work for many years. Her attention to detail is extra-ordinary and her writing has quietly and effortlessly trained my eye to see beyond the first impression, and always to keep looking. Her tribute to Derrick, quoted below, will give you some insight into the many interests of the lovely man that prompted me to write about friezes and murals.

We are very sad to report the death of Derrick Johnson at the end of August. Derrick was an enthusiastic member of the Clapham Society’s Local History Sub-committee from 2007, and he took over as Convenor from Peter Jefferson Smith in 2010. He also represented the Society on the Wandsworth Heritage Group from the time of its formation in 2010.

Derrick will be best known to many members as a leader of walks. He led many over the years and devised several new ones, including Clapham in WWII which he adapted for schools with particular success. The Deep Shelters fascinated him and following a well-researched talk to the Society some years ago, as soon as Clapham South Deep Shelter was opened up, he arranged for a specialist talk and a site visit. A visit to Clapham Common Deep Shelter soon followed as well as the installation on it of one of our commemorative Green Plaques, another initiative with which he was closely associated.

Derrick derived much pleasure from research for some of the unusual Local History queries we receive. Among these the Clapham connections of the criminal mastermind Fu-Manchu, and the story of the Swedish inventor of the letter bomb who lived in a Clapham Park villa until the law caught up with him and he was removed to Brixton Prison, provided material for articles in the South London Press (now on the Clapham Society website).

Derrick was quiet, mild mannered and gentle, but his many interests were followed with energy and enthusiasm. He spent many happy days (and some not so happy) at the Oval following the fortunes of Surrey, and was a knowledgeable plantsman, not, as he would insist a gardener. He had a deep knowledge and interest in wine, and also in beer. Perhaps most extraordinary was his knowledge and following of theatre of all kinds, and in various venues. He could remember faultlessly details of productions he had seen many years ago and was always game for anything new in the theatre. I was regularly presented with a neat cutting from The Guardian of a review by the saintly Michael Billington as a suggestion for a proposed visit with him and Janet. And his knowledge of interval ice-creams was legendary!

I personally mourn and shall greatly miss a good friend, and the Society has lost a much valued member.

You might find the variety of style and subject matter in my artworks and paintings confusing. In spite of advice from art advisors and galleries to ‘find a style’ and ‘be focussed’, I have never worried about it. Knowing such wonderful people who dip their toes in everything and seeing how it enriches their lives dispells all fear of criticism.

Painting murals and experiments with fresco has been a small but exciting part of my life as an artist.